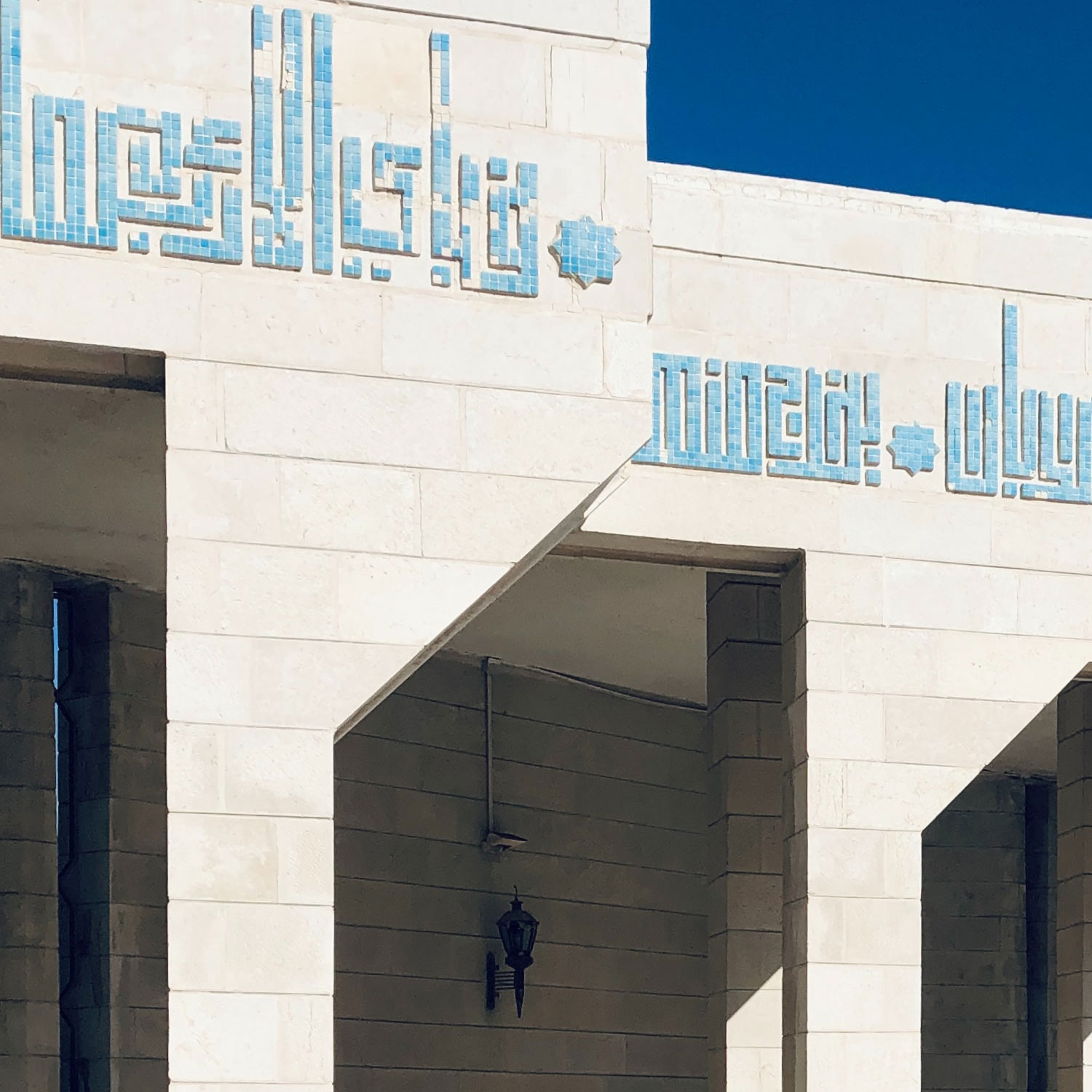 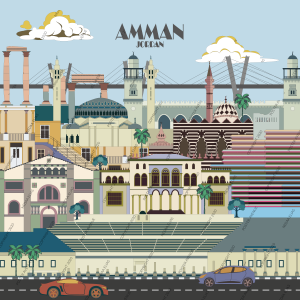 Built on seven hills, each with its neighborhood, Amman has grown from the circumference of these circles. Amman’s architectural gallery encompasses picturesque and original imprints. Having a rich and deep routed history, the modern architecture of the city mingles with the relics of ancient civilizations. Varying from Greek, Roman, Byzantine, and Islamic architecture, these remains blossom within the city’s edges.

Amman’s city center holds many of its historic artifacts, with Jabal Amman or Jabal Al-Jofah one of the seven originally inhabited hills. Located at the base of Jabal Al-Jofah, Amman’s Roman Theatre dates back to the 2nd century. The builders of this large steep structure made use of the natural topography by carving the theatre into the hillside and orienting it to face the Northside for better shading. With 6,000 seats, the monumental structure is nowadays a cultural venue, hosting Book Fairs, ceremonies, and music festivals. Next to it stands Amman Citadel, the central landmark of the city. Being initially erected during the Bronze age, the famed Citadel have been subsequently occupied by various civilizations, ranging from the Assyrians, Babylonians, Ptolemies, Seleucids, Romans, Byzantines, and lastly the Umayyads. Being occupied by several civilizations in history, the complex is an illustration of historic stratification. It is considered among the oldest continuously occupied sites. The Temple of Hercules is the most prominent still-standing structure of the citadel, with its immense Corinthian order columns. Another famous architectural site in downtown Amman is the outstanding King Abdullah I Mosque. Built by King Hussein in memory of his late grandfather, this modern mosque was inaugurated in 1989. It features a large blue mosaic dome, 35m in diameter, spanning the entire octagonal prayer hall. This mosque is a true representative of blending modern and traditional practices, with its geometric cuts, cutting-edge minarets, and the avantgarde Quranic inscriptions that decorate its interior and exterior. The mosque functioned as the official state mosque until 2006 when King Hussein Mosque was assigned instead. The latter reflects the silhouette of an Islamic fortress with its low minarets, bold arches, and crenellations. Located at a high altitude, the structure gains its visibility over the city’s skyline. The architecture echoes a Levantine style with the Umayyad-style ornamentation carved in local stone. A typical Umayyad style is represented by Abu Darwish Mosque. Built at the top of Jabal al-Ashrafiyeh, one of Amman’s seven hills, the building is notable for its alternating course of black and white stone. It represents an Islamic masterpiece, reminiscent of traditional Levantine architecture. A much modern manifestation of this celebrated style could be seen in Al-Iskan Bank Building. Rising with 98m height, the modern high-rise reinterprets the traditional Levantine style with the alternation between the white roof canopy and black curtain walls. It is thus considered a cultural manifestation of the changing morphology of the longstanding society. A society that has experienced several influences from different civilizations also retains distinctive architecture, especially noticed in the Circassian village of central Amman. Darat al Funun houses demonstrate a Mediterranean architecture, inspired by Venetian style, a style that is widespread in cities like Beirut, Haifa, and Jaffa. The main Darat al Funun building is a two-story residence of the British commander in the 1920s. After being converted into a school for girls, the building was abandoned from 1978 to 1992. Undergoing several restorative works, the building nowadays serves as an art foundation. The restoration architect, Ammar Khammash, retained most of the building’s original features such as the limestone elevations, the twin staircase, and the grand semicircular entrance portico. Another example of exceptional beauty is the crown Palace of Raghadan. The exquisite palace brings to mind several influences grasped in the protruding central portico from the Ottomans, pitched roof with Venetian tiles, and colored glass windows resembling al-Aqsa Mosque. Built to reflect glory, prosperity, and optimism, the palace is a great testimony to Hashemite history. South of Amman, in Madaba town, St. John the Baptist Roman Catholic Church is an early 20th century church, erected on an ancient archaeological site. The church is constructed with stones from antiquity and adorned with Roman columns of Corinthian capitals. It displays distinctive geomorphological qualities of a historic stratification. A majority if not all landmarks ensure a historic and geographic continuity, making Amman in specific and Jordan, in general, a great depiction of the local region. Yet few structures defy this notion. For instance, Abdoun Bridge denotes a contemporary structure, being the only cable-stayed bridge in the country. The bridge is composed of three Y-shaped towers to cross the Wadi Abdoun.

Amman is dubbed as “the White City” due to the widespread of limestone houses, required by municipal law. The new construction is regulated by a specific authentic style, which preserves the city’s national identity while providing modern living facilities. Amman is a successful example in terms of upgrading and modernizing the authentic architectural and urban character. Having a hilly topography, the urban cityscape appears as a Lego-like scattered arrangement of homogenous buildings. 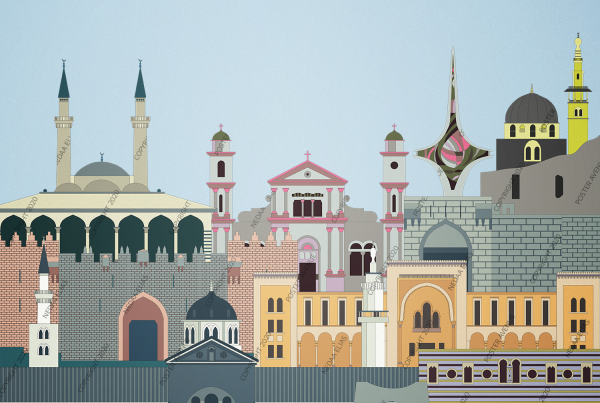 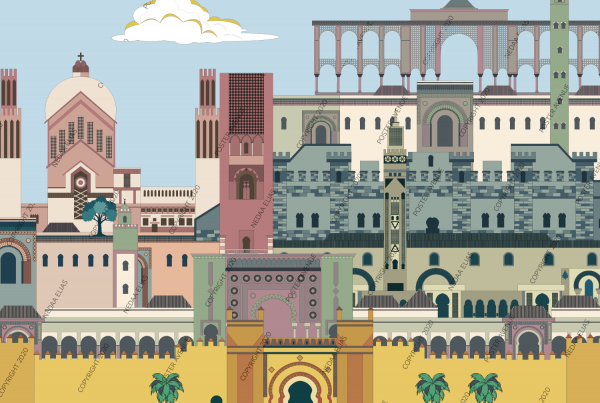