North Africa, a region known for its rich cultural diversity and marvelous architecture. The history of North Africa is nearly as old as that of the world itself. North Africa has always played a central role in human civilization. According to historians, this region was a significant exit point for the first modern humans to trek out of the continent. Indeed, you can hardly discuss culture, architecture, art, or religion without making references to the region. Tourists troop to North Africa from all over the world to experience the only remaining evidence of ancient civilization. Many of those pieces of evidence are immortalized in the region’s iconic landmarks. Read on to uncover some of North Africa’s most enchanted UNESCO World Heritage buildings.

Welcome to the Colosseum of North Africa! Nestled in the quaint city of El Djem, Tunisia is an oval amphitheater known as the Amphitheatre of El Jem. This amphitheater was a significant point of interest for Romans during the pre-historic times. The building was constructed in 238 AD and to date, is one of the most preserved Roman ruins in the world. The facility is estimated to hold 35,000 spectators. In the Middle Ages, the building was used as a fortress. It mainly played a central role during the Vandals invasions in 430.

Arabs exploring the country as early as 647 also found El Jem resourceful for most of their exploits. The amphitheater has been featured in a couple of films and television series. Examples include the Long Way Down and Monty Python’s Life of Brian. Most notably, Nike, the sportswear company, shot a powerful television commercial here in 1996. The ad depicted some of the world’s legendary footballers, such as Luis Figo, Ronaldo, Paulo Maldini, etc., defending the game against marauding Roman warriors. 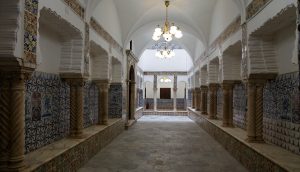 Our next building isn’t an amphitheater but a fortress. Indeed, the name Casbah itself means a citadel. That explains the significance of this building during the ancient and middle ages. This citadel features the remains of old mosques, Ottoman-style palaces, and a traditional urban landmark. Most ancient ruins in North Africa were already dysfunctional by the dawn of the 20th century. However, Casbah has continued to play its role in shaping the socio-political future of Algerians. As recently as the 1950s, the citadel was used to plan the National Liberation Front insurgency. These insurgencies were instigated by political and religious dissidents, against the French and law-enforcement agencies. Today, Casbah is not only a haven for tourists. It also stands as a reminder of some of the struggles Algerians have gone through from time immemorial. 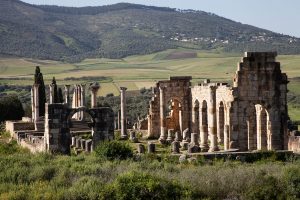 Away from fortresses and amphitheaters, our next feature building is an archaeological site in its own right. Volubilis is one of the oldest structures in North Africa. The building is a treasure trove of information and adventure. It’s a living reminder of the influences of the ancient Roman and Islamic forces. Historians believe that Volubilis must have been very instrumental in shaping the modern-day cultures and religions in Morocco. During the ancient and middle ages, Volubilis was a crucial interchange center between local and foreign traders. The building has played a critical role in the preservation of the Roman and Islamic traditions, including the lost Libyco-Berber and Arabo-Islamic cultures. Most notably, Volubilis hosted the Muslim dynasty of the Idrissids. 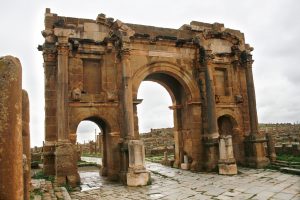 Now, you can hardly discuss beautiful North Africa buildings without mentioning the Arch of Trajan. The Arch of Trajan is a three-vaulted arch that’s made up of the western gate of the city of Batna, Algeria, with the other side stretching up to the road near Lambaesis. Construction of the12 meters arch began near the end of the 2nd century and continued through the early 3rd century. The walls of this arch are full of inscriptions that speak to the history of Trajan around the year 100. The Arch of Trajan is not only remarkable for its rich cultural heritage. The structure is also an architectural marvel in its own right. And though it’s purely now a tourist center, the arch still offers valuable clues into the ancient architectural civilizations. 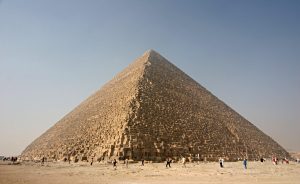 Cave of the Swimmers 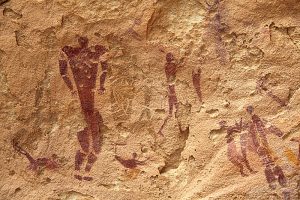 Cave of the Swimmers, Egypt by Roland Unger

Last, but certainly not the least, is the Cave of the Swimmers in Libya. This iconic landmark is located in the Gilf Kebir plateau. Tucked away hundreds of kilometers into the Libyan Desert, the site remained undiscovered until 1926. In 1933, cartographers discovered petroglyphs and painting artifacts that date back to the Neolithic error. These artifacts depict scenes of men and animals swimming together, hence the name. The findings suggest that this harsh desert may have one time teemed with life. Besides, the discoveries point to the possibility of earlier inhabitants being predominantly farmers. Though petroglyphs have been discovered elsewhere across North Africa, they aren’t as vivid and telling as those found at the Cave of the Swimmers.

There goes our highlight of some popular UNESCO World Heritage sites in North Africa. Though most of these sites are presently in a state of ruin, they still hold the key to the region’s mastery of design and architecture.

As a professional engineer with over five years’ experience, writing is my passion as it enables to express abstract ideas about designs. Architectural masterpieces are my biggest fascination, and they are likely to from the bulk of most of my publications. Valuable feedback is always welcome since it will make be a better contributor on the platform.